Home › Articles › The Aliens Are Among Us! Again! (and in at a theater near you in “Arrival”)

The Aliens Are Among Us! Again! (and in at a theater near you in “Arrival”)

Huge alien space pods have landed at a dozen spots around the world.

Will a linguist (Amy Adams) be able to communicate with these beings from another planet, ascertain their intentions, and respond quickly if they are out to get us? 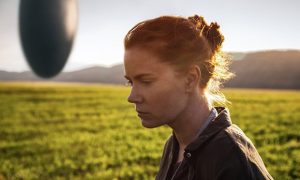 78 years after Orson Welles scared millions with his Halloween broadcast of “The War of the Worlds,” bad guys are back in “Arrival,” the latest in a long list of movies and books about aliens among us.

Remember when horror fiction writer Whitley Strieber said aliens abducted him, probed his body, and declared him their “chosen one” in his creepy, allegedly nonfiction bestseller, Communion?

As Dave Bradstreet and I write in our new book, Star Struck:

Most Americans think we’ve got company in the universe, and nearly a third of us believe aliens have visited our planet.

The search for actual aliens (or SETI) has been going on for decades, but so far none have turned up. A growing number of space missions is probing more of our cosmos’s nooks and crannies.

But even if none are ever found, they will survive in our imaginations, our movies, and our sci-fi novels.

Dave and I suggest an answer:

Here’s my theory explaining why most of us seem to believe alien life forms are out there somewhere: pop culture. Our hearts and minds have been shaped by decades’ worth of adorable aliens who’ve visited us on screens small and large most of our lives. I know these celebrity extraterrestrials have informed my imagination about life in space.