Home › Articles › Will the GOP “Lose Its Head” in Cleveland?

Will the GOP “Lose Its Head” in Cleveland?

The dissection of the Republicans’ 1964 shellacking came out half a century ago, but it’s still generating headlines and debates.

Washington Post writer E. J. Dione quoted it in a May column: 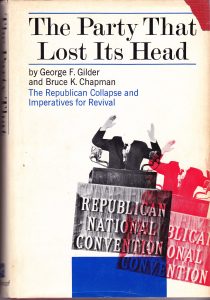 “No modern precedent exists for the revival of a party so badly defeated, so intensely discredited, and so essentially split as the Republican Party is today.”

Thus wrote George Gilder and Bruce Chapman in “The Party that Lost its Head,” after Barry Goldwater’s landslide 1964 defeat. The costs of the debacle were very high: The GOP lost 36 House seats and its Senate contingent was reduced to a corporal’s guard of 32.

Patrick Buchanan fired back, saying the book’s doom and gloom were misplaced, and the authors’ ideas half-baked:

Out of Goldwater’s defeat came the New Majority and Reagan Revolution. And Chapman and Gilder moved rightward to serve with distinction in that revolution.

The prodigal sons were welcomed home, and Gilder would recant:

“The far right – the same men I dismissed as extremists in my youth – turned out to know far more than I did. At least the ‘right-wing extremists,’ as I confidently called them, were right on almost every major policy issue from welfare to Vietnam to Keynesian economics and defense. …”

I tracked down a used copy of this 1966 book so I could see for myself if it sheds any light on the current election cycle. I’m neither a Republican nor a Democrat, but I’ll be watching the GOP convention this week to see if any of the book’s critiques of the Goldwater-era party resonate with the party of Donald Trump.

Here’s The Party That Lost It’s Head critiquing the GOP’s dominance by its “arch conservative” wing:

“We believe that the Republican Party must be regained by the Republican majority from which it was seized during the last few years….In the House the party is more securely under the control of the arch conservatives than before.”

Here’s The Party That Lost It’s Head suggesting that demographic challenges are compounded by other self-inflicted wounds:

“Republican statistical weakness is compounded by intellectual bankruptcy, by ideological banality, and by political illusion.”

Here’s The Party That Lost It’s Head on campaign demagoguery:

“Barry Goldwater’s campaign lacked even a scintilla of intellectual credibility. It was clear to anyone of the most rudimentary intelligence that, as president, Goldwater could not do any of the things he promised….Democrats propose to do something about the sources of the fears which they exploited; Goldwater proposed to do nothing which would have any significant effect at all on the fears he exploited. Goldwater’s demagoguery was devoid of the rationality of cause and effect.”

Here’s The Party That Lost It’s Head critiquing Republicans for being the party of “no”:

Here’s The Party That Lost It’s Head on GOP infighting:

“The Republican Party is still in Civil War, still cursed with the incubus of extremism and undermined by the incompetence of a timid national headquarters.”

In 1966, Kirkus reviewed The Party That Lost It’s Head, declaring:

The book is an effective indictment of the party’s suicidal instincts and offers the kind of constructive criticism that can only do good for any hopeful prospects the Republicans may entertain.

I’ll be curious to see what kind of party emerges from this week’s convention in Cleveland.

As for Gilder and Chapman, these former rebellious “liberal Republicans” have become loyal party conservatives. And both remain busy. 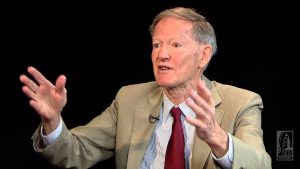 Gilder is Chairman of George Gilder Fund Management, host of the Gilder Telecosm Forum, a Senior Fellow at the Discovery Institute, a Member of the Board of Advisors for the Independent Institute, and a contributing editor of Forbes magazine. He writes for The Economist, American Spectator, Harvard Business Review, and the Wall Street Journal. Here’s a recent video of his Independent Institute talk, “The Secret to Restoring the American Dream.”