Home › Past Is Present › Those Quotable, Quixotic Jesus People

Religion historian Larry Eskridge’s excellent new book, God’s Forever Family: The Jesus People Movement in America (Oxford) is the definitive look at “the Jesus Revolution” of the 1960s and 1970s, “a remarkable upsurge in traditional, evangelical Christianity with a hippie twist” that “is one of the most significant American religious phenomena of the postwar period.”

Eskridge, who has been working on this project for ages, has a great ear for killer quotes, as this selection of ten comments indicates. 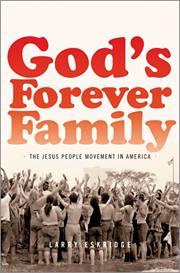 “No ‘thou shall nots’ about that.”
– Ted Wise, explaining why he and other early Jesus People continued smoking pot

“I saw them as parasites upon society.”
– Pastor Chuck Smith on the hippies who were attending Costa Mesa’s Calvary Chapel in increasing numbers

“No Bare Feet Allowed in the Church.”
– Sign posted by disgruntled members of Calvary Chapel members. (Smith had the sign removed.)

“We do not believe…that a shave and a haircut make you a Christian any more than long hair and sandals….We are not rehabilitating people to melt back into society as good, clean-shaven and well-spruced American citizens.”
– Letter from leader David Hoyt to supporters of Atlanta’s house of Judah community

“These girls are somewhat afraid of men, but they are very precious people and God loves them so much.”
– Kent Philpott on the members of a lesbian commune he befriended

“A collar or a business suit wouldn’t get you anywhere. The first time I walked into a trip room I wore a tie and a suit. The heads panicked. They thought I was a narc agent out to bust them. After that I switched to turtle necks and psychedelically-patterned slacks or bell bottoms and sandals. Then came the beads.”
– Arthur Blessitt, founder of Hollywood’s His Place, on the evolution of his wardrobe

“Repent.”
– Name that Akron’s Craig Yoe gave to his dog, enabling him to yell the word at the top of his lungs in the city’s parks

“They are great kids. I haven’t been called a pig once.”
– Policeman working EXPLO ’72 in Dallas