Home › Articles › John Denver and Windstar: the Death of a Dream

John Denver and Windstar: the Death of a Dream

John Denver died 16 years ago this week when the small plane he was piloting crashed into the Pacific Ocean. He was 53. This year, a bit of Denver’s dream died with the sale of land that had housed his Windstar Foundation, which focused on the environment and other issues. 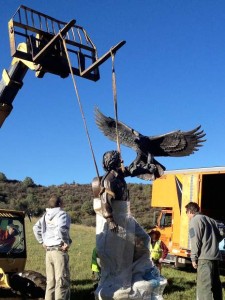 Aspen Times photographer Scott Condon took this photo of John Denver’s “Spirit” statue being removed from the property of the former Windstar Foundation.

Forty years ago, Denver had a huge hit with “Rocky Mountain High,” a song inspired by his love for Colorado (not drugs, as he testified before Congress). The song was named an official state song by the Colorado General Assembly in 2007, five years before voters here approved recreational marijuana.

Earlier this year, Denver’s music experienced a mini-renaissance thanks to The Music is You, a tribute album featuring Dave Matthews, Emmylou Harris, My Morning Jacket, and other artists.

The tribute album gave critics a new chance to assess Denver’s musical legacy, but meanwhile, Denver’s vision for Windstar has faded with the sale of nearly 1,000 acres of land near Aspen that he donated to the foundation.

Denver told me about his vision for Windstar in a 1991 interview for The Colorado Springs Gazette about his spiritual values, a subject says he had never explored in depth during thousands of previous media interviews:

“I was somebody who felt alone and spent a lot of time alone. And one day I had a vision and saw that some day I was going to have a place in the mountains where people could come from all over the world. They would be friends of mine, and they would be able to come to this place, and meet other people like themselves, and rest and rejuvenate, and go back to whatever they were doing, knowing that they were not alone. That was pretty far out for a 12-year-old kid.”

The son of a Catholic mother and Protestant father, Denver was one of the most popular recording artists of the 1970s. He was attending Presbyterian Church of the Covenant in Tucson, Arizona when he began doubting Christianity and experiencing visions about the universe and his future.

His spiritual journey would take him through Eastern religions, American Indian spirituality, humanism and est (Erhard Seminars Training). But his real religion was love of nature. In “Rocky Mountain High” he sang about the comfortable familiarity with God that nature-lovers enjoy: “You can talk to God and listen to the casual reply.”

In 1976, Denver and a partner founded Windstar on a 957-acre property near Snowmass. Now Windstar has sold the property and relocated what remains of Windstar to nearby Basalt. Locals worry that the property Windstar conserved for 37 years will be developed without respect for the area’s beauty.

Finally, in September, a statue of Denver entitled “Spirit” was moved from the former Windstar to the Colorado Music Hall of Fame in Denver. Here, fans can appreciate Denver’s work. Meanwhile, back in the Aspen area, the worries about the Windstar land continue.