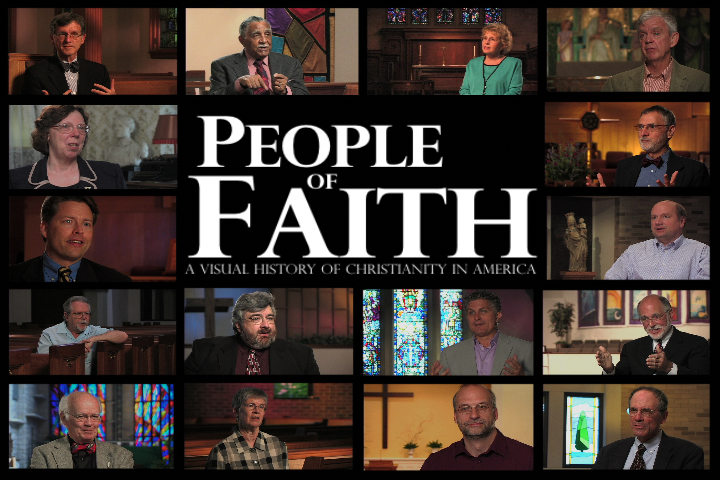 A Visual History of Christianity in America

Why is religion such a powerful, enduring and divisive force in American life? Find out in this informative, accessible series, which covers four centuries of history in three brisk hours and features the insights of America’s top religious scholars.

Beginning with the first European settlers who brought their faith with them to the New World, and continuing through domestic and international wars and the “culture war” issues of the 21st century, People of Faith shows how the first country in the world to be founded on the basis of religious freedom has became a place of unprecedented religious commitment, diversity and experimentation.

“The people who settled this country had a genius for framing questions in religious terms,” says Scott Appleby of the University of Notre Dame. The series also features these experts:

Episode 1
Faith in the New World: From Monarchs to the Marketplace
The people who came to the New World hailed from many places and for many reasons. The faith and religious practices they brought with them helped shape a nation where religious freedom gave birth to unprecedented levels of religious diversity, experimentation and competition.

Episode 3
Rebels with a Cause: Faith In Action
From the beginning, Americans have been people of faith, but their faith has not been confined to their churches and their “spiritual” lives. Their faith has inspired and compelled them to act in order to create a more just and moral nation. By studying American Revolution, Civil War and historic moral crusades, we can think about how to better apply our faith to the challenges we face today and tomorrow.

Episode 4
The Challenges of Change
Whenever people of faith felt they had created the ideal church or the good society, new developments and challenges arose which upset the status quo and forced them to rethink their beliefs and find new ways to apply them to current conditions. Issues explored include religion and science, Christ and popular culture.

Episode 5
Homegrown Saints
American culture’s level playing field has given people of faith a wide-open environment for developing and promoting their beliefs. Episode 5 looks at ten key individuals who have embodied America’s passion for making faith relevant and effective:

Episode 6
The Future of Faith: Challenges We Face
The concluding episode in the series will examine the impact of 9/11, post-modernism, consumerism and pluralism in the ongoing challenges of the church, including spirituality, evangelism, worship and community

Credits
Distributed by Vision Video
Executive Producer: Larry Eskridge
Writer: Steve Rabey
Producer/Director: Tim Frakes
Produced by the Institute for the Study of American Evangelicals at Wheaton College with the support of a grant from the Lilly Endowment, Inc.