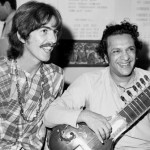 How George Harrison Brought the East to the West

“My Sweet Lord,” a global hit featuring chants of “Hallelujah” and “Hare Krishna,” was the first solo single by George Harrison, the former lead guitarist of the world’s biggest rock band. His decades-long spiritual quest (starting with Eastern music before progressing to Hinduism and Krishna Consciousness) changed the ways people in the West looks at God, gurus and life, and made him the most influential religious rocker of the last half century.