You’ve probably seen Khizr Khan, the Pakistani-born Muslim who criticized Donald Trump during the Democratic convention. His short speech has inspired a sales boom in copies of the U.S. Constitution

Trump fired back at Khan in a lengthy interview on This Week with George Stephanopoulos that was taped here in Colorado Springs.

Khan has been ubiquitous in the media ever since, including this interview with his wife Ghazala on Monday’s PBS News Hour.

His comments and approach remind me of a godly Muslim man I’ve known for 20 years, Arshad Yousufi. I wrote about Arshad last summer, highlighting his patriotism, his public criticism of terrorism, and his love for the Fourth of July. 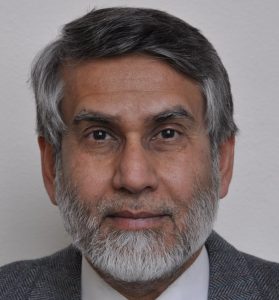 The questions arise every time a terrorist praises Allah while beheading or bombing innocent women and children.

Where are the moderate Muslims? And why don’t they stand up and say something?

Ever since 9/11, Arshad Yousufi, the spokesman for the Islamic Society of Colorado Springs, has been standing up and speaking to more than 50 church and Bible study classes, community groups and students at local colleges and high schools. He also speaks to reporters and offered sound bites to ABC affiliate KRDO for a recent story on a local motorcycle club’s anti-Muslim barbecue.

“If people knew enough Muslims, this negative image would not be their perception of Muslims,” he says.

For many Americans, Khan’s comments may be the first they’ve ever heard from a devout and fiercely patriotic Muslim American.

But as Arshad Yousufi told me, patriotism comes after faith.

“Of course, I am a Muslim first. I believe if your allegiance to anything other than God comes first, you are an idolater.”