At a time when Americans hang on to their cars for an average 11.5 years, Voyager 1 and Voyager 2, two NASA space probes, are still going strong nearly forty years after liftoff. 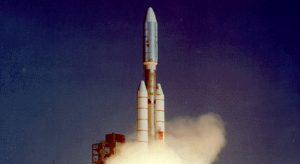 And in August 2012, after a journey of thirty-five years and more than 10 billion miles, Voyager 1 earned a cherished place in history, becoming the first human-made object to leave our solar system and cross over into interstellar space.

NASA has praised the Voyager mission as its “most scientifically productive mission ever,” and the agency says the two probes will likely have enough juice to remain fully operational through 2025.

In time, power will fail, systems will begin to shut down, and Voyagers 1 and 2 will go quiet and dark, losing their ability to investigate space and relay findings back to scientists on Earth.

But that’s not the end. Unless the two craft are destroyed by space junk, they will spend the next few billion years passing through our own Milky Way galaxy, only one of the many billions of galaxies floating around out there. 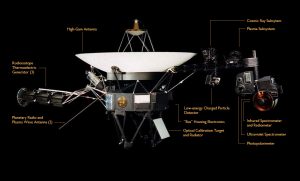 As David Brandstreet and I say in our new book, Star Struck:

Some forty thousand years from now, Voyager 1 is expected to draw closer to AC+79 3888, a “nearby” star in the Camelopardalis constellation. A quarter-million years or so later it will pass by Sirius, the brightest star in the sky.

President Jimmy Carter dedicated the Voyagers before liftoff, suggesting they could “survive a billion years into our future . . . when our civilization is profoundly altered and the surface of the Earth may be vastly changed.”

The Voyagers’ closing act may be the most exciting. Even after the two craft cease their labors as scientific probes, they will continue their work as cosmic ambassadors, reaching out to any forms of extraterrestrial life they may encounter during their journeys.

If creatures from one of our Creator’s other planets ever retrieve one of these Voyagers, they will find messages of greeting from us Earthlings, along with an invitation to get to know us better by browsing a multimedia family album featuring iconic sights and sounds from our planet.

Will anyone out there ever play the record and see Earth’s family album? If so, what will alien life-forms make of the varied sights and sounds from our tiny blue planet circa 1977, the year New York City went dark and the first Apple computer went on sale:

President Jimmy Carter added his own message of greeting on the Golden Records:

“We cast this message into the cosmos,” wrote “This is a present from a small distant world, a token of our sounds, our science, our images, our music, our thoughts, and our feelings. We are attempting to survive our time so we may live into yours. We hope someday, having solved the problems we face, to join a community of galactic civilizations. This record represents our hope and our determination, and our good will in a vast and awesome universe.”

Do you think anyone out there will ever “play” Voyagers’ records?

You can read all about stellar travel in Star Struck: Seeing the Creator in the Wonders of Our Cosmos, written by yours truly and astronomer David Bradstreet (Zondervan, Sept. 2016).