Home › Articles › Give Graciously, but Don’t Be a Dumb Donor: You Can Do a Simple Charity Checkup

Give Graciously, but Don’t Be a Dumb Donor: You Can Do a Simple Charity Checkup 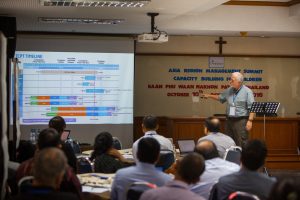 Americans donated more than $1 billion to religious charities last year. But which charities use donor dollars best? And which evangelical parachurch organizations deliver the most “ministry per dollar”?

That’s what I wanted to find out. I contacted nearly 3 dozen ministries, requesting their audited financial statements so I could “look under the hood” and see how much they actually spend on ministry program. (As opposed to overhead, fundraising and other non-ministry costs).

My efforts were supported by the Fund for Investigative Journalism, and the fruits of my labor were recently published in two articles:

One) a “local” article published in the Colorado Springs Gazette focusing on that city’s 23 largest parachurch organizations.

Charities Vary in Efficiency and Transparency

I found out two important things you should keep in mind as you (along with millions of other donors) make charitable contributions at the end of the year:

(See which organizations spend the most and least on program in the chart in the national article.)

Second, ministries differ in how transparent they are about their financial operations. I was surprised to discover that four Colorado Springs-based ministries that belong to the Evangelical Council for Financial Accountability violated the council’s transparency standards by declining to provide me with their audited financial statements.

(When I contacted an ECFA representative for a response, ECFA promptly contacted the four ministries, which belatedly saw the light and sent me their documents. No word yet from ECFA on any plans it has to educate its members about transparency, which the ECFA calls both a matter of “moral integrity” and “a condition of continued ECFA accreditation in good standing.” And no word from the four ministries about any plans they have to be more transparent in the future.)

Thank you for bringing the ECFA guidelines to our attention. We have since added a link to our most recent audited financial statement to our public website (http://www.navigators.org/About-Us/Financial%20Report).

You can do your own simple charity checkup

Here’s what you need to do to see which charities deliver the most “ministry per dollar.”

-See if the charities use support make their audited financial statements available, either online or by request.

-Use these statements to find out how much of every dollar charities spend on “program” (the good works that are the reason you’re supporting them).

-Check the websites of charity watchdogs like Charity Navigator and Ministry Watch, both of which helped me in my research.

Compassion still gets it right

In the “local” version of the story I showed how Compassion International gets it right when it comes to transparency. The ministry makes more than a dozen financial reports readily available for all to see on its website.

I edited Compassion’s magazine for a few years, back in the day. Every year, President Wally Erickson insisted we add eight pages to the November/December issue so we could include the latest audited financial statement. When I interviewed Compassion’s chief financial officer Ed Anderson for the article, I got the distinct impression that financial integrity remains a core value at this ministry.