It has been an exciting week at the Republican convention in Cleveland. Democrats are getting ready to take the stage next week in Philadelphia. 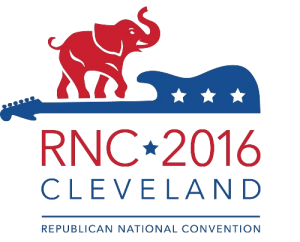 But for many, this year’s election cycle has been frustrating. Here’s a remedy for the political blues, in three easy steps.

Judith Regan, the publishing superstar who has helped create bestselling books by everyone from O. J. Simpson to Rush Limbaugh, has a simple suggestion:

Think about it. The candidate who sells the most books wins.

So who would win this literary-electoral battle? Here’s a clue. The winner once called the chairperson of the Republican National Committee “Reince Pubis.”

According to Regan’s calculations, Ben Carson would be president, based on sales of nearly 600,000 copies of his two books, One Nation and A More Perfect Union.

But combining Carson and Clinton on the same ticket may be tricky after Carson suggested that she worships the devil in his Tuesday speech in Cleveland.

“Are we going to elect someone as president who has as their role model somebody who acknowledges Lucifer? Think about that,” he said, attacking Clinton and fellow “secular progressives.”

“If we continue to allow them to take god out of our lives, god will remove himself from us. We will not be blessed and our nation will go down the tubes. We will be responsible for that,” he said.

Carson’s comments, which involve Clinton and the late activist Saul Alinsky, are complicated. But CNN’s “Reality Check Team” said Carson’s claims– that Alinsky influenced Clinton’s thinking, and that Alinsky acknowledged Lucifer in one of his books–were “mostly true.”

Two) Laugh at the ads

After the conventions come the campaigns and the TV ads. Are you tired of hearing candidates’ ridiculous platitudes or their ridiculous attacks on their opponents?

Then chill out with this “Generic Presidential Campaign Ad” that incorporates many commercial conventions. 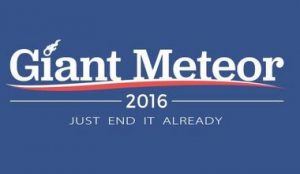 If all else fails, sit down, bow your head, and beg the Creator to end it all with a huge extraterrestrial collision.

According to a story by Alabama reporter Leada Gore, polls show that annihilation by meteor is the choice of 27 percent of independents and 22 percent of voters ages 18-29.

Is a meteor or asteroid Armageddon heading in our direction? Statistically speaking, it’s more likely that you will die in an airplane wreck than be killed by an asteroid.

But the dangers are real. That’s why right now, scientists with NASA’s Near-Earth Object Program currently track some six hundred thousand orbiting objects, paying closest attention to the fifteen hundred or so objects that are big enough and close enough to cause real damage

Read all about asteroids and meteors in Star Struck: Seeing the Creator in the Wonders of Our Cosmos, written by yours truly and astronomer David Bradstreet (Zondervan, Sept. 2016).