Thomas Sutherland, a U.S. professor who taught in Lebanon before being abducted and held captive for six years, died last Friday.

But as he told me when I interviewed him in 1992, he would have been dead much earlier if not for his conflicted faith in God.

“I had prayed so hard, but the more I prayed, the worse things got,” he said. 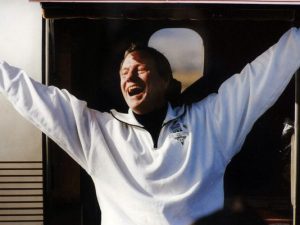 All 77 months that Sutherland spent trapped as a hostage were tough. But during the four darkest months that he was separated from fellow prisoner and journalist Terry Anderson, his thoughts turned to suicide.

“Things were really black, and I had lost faith in God,” he told me, explaining how he put a plastic trash bag over his and tied it around his neck using a sock.

“Two minutes later, my chest began to hurt like crazy, and an image of my wife and three daughters came up in front of me.

“Either I wasn’t desperate enough to go through with it or I didn’t have the courage. I’m not sure which.”

Reunited again with is roommate, Sutherland learned lessons from Anderson in the finer points of prayer.

“Sutherland, you’re praying the wrong prayer,” Anderson told him. “You can’t try to get out of there. You need to pray for the strength to get through.”

That’s what Sutherland did

“I still believed in God, but I was rather disillusioned with the organized church, which I thought was quite hypocritical organization.”

It was a formal church inside prison walls helped Sutherland reconnect with God and deepen his faith. The small congregation, jokingly called Church of the Locked Door, was organized by fellow prisoner and Catholic priest Martin Junco, who hoarded a daily ration of bread to celebrate mass.

“I saw that if you lack all faith that you’re never going to make it out of there,” Sutherland told me.

“And if you feel that there is no God looking out for you, you’re never going to make it out of there. And I came to the conclusion that the church was a very necessary organization for humankind.”

Finally released in 1991, Sutherland spoke about his experience thousands of times to church and civic groups.

In 2001, the family won a lawsuit against Iran and received more than $20 million payout from frozen Iranian assets. Sutherland donated much of it to charity.