Home › Articles › See “Meteor Shower of the Decade” This Week

See “Meteor Shower of the Decade” This Week 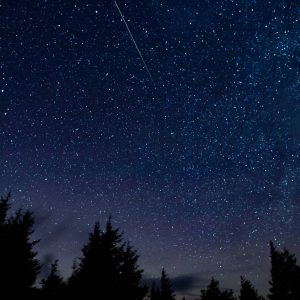 The heavens will be putting on a big show as Thursday night becomes Friday morning.

The annual Perseid meteor shower is back, this time twice as powerful as usual, giving us a display that Popular Mechanics described as “the meteor shower of the decade.”

If you find yourself outside during the night Thursday, don’t forget to look up.

Getting to Know Meteors

Astronomer David Bradstreet and I explore meteors in our new book, Star Struck:

Meteors are chunks of interplanetary material that typically burn up when they come into contact with our atmosphere.

We call them meteoroids when they’re floating in space. They’re meteorites once they land on the ground, as many thousands do every year. And when Earth’s orbit takes it through the debris field of a comet orbiting near the Sun, we witness a meteor shower.

Popular Mechanics says this year’s show will be twice as big as normal, thanks to some additional guests:

The Perseids typically peak in mid-August every year, when the Earth intersects with the trail of Comet Swift-Tuttle. Debris from the comet impacts the Earth’s atmosphere and streaks across the sky, creating shooting stars….

This year, the Perseids are expected to contain meteors from comet trails laid down in 1862, 1479, and 1079. This means that some of the meteors that will impact Earth’s atmosphere next week broke off from the Comet Swift-Tuttle nearly a thousand years ago.

There’s a helpful NASA site that can help you get the most out of this summer’s Perseid shower show.

Unfortunately, not everyone can see meteor showers or other heavenly glories. Some of us who live in big cities are blinded by our own light: we’re unable to see into space because we’ve let there be too much light on Earth.

This  can Dark Site Finder can help you locate the nearest dark spot.

OOPS! The Ones that Sneak Through

Our atmosphere intercepts most asteroids, but every once in a while, a big one gets through, as Dave and I explain:

In 1908, the Tunguska meteor was traveling toward Earth at 40,000 mph when it exploded far above our planet’s surface. The blast’s force knocked down an estimated 80 million trees across some 800 square miles, instantly turning forests of tall timber into trillions of toothpicks.

You can actually visit the remains of one meteor: 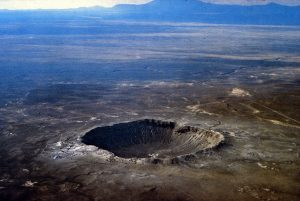 A 150-foot-wide meteor struck Arizona some 50,000 years ago, unleashing the explosive force of 20 million tons of TNT….

Mining entrepreneur Daniel Barringer bought the crater in 1903, hoping to get rich mining its awesome ore. But he never found his mother lode.

Where did Barringer’s meteor and all its supposed mineral wealth go? Scientists say that when the meteor collided withg the desert, the meteor vaporized upon impact, spreading tiny specks of molten metal across the desert for miles around.

Today, Barringer’s descendants still own the crater, and the Barringer Crater Company welcomes thousands of paying guests to view exhibits at a nearby visitor’s center and take brief tours along part of the crater rim. During tours, guides show guests where the remains of Barringer’s meteor went, sticking a small magnetic rod into the soil and holding it up for all to see the tiny specks of metal clinging to the magnet.

The psalmist David tells us:

The heavens declare the glory of God; the skies proclaim the work of his hands (Ps. 19:1).

Catch the Perseid meteor shower to see that glory vividly declared and proclaimed!

You can read all about meteors and other mind-blowing cosmic characters in Star Struck: Seeing the Creator in the Wonders of Our Cosmos, written by yours truly and astronomer David Bradstreet (Zondervan, Sept. 2016).

You can pre-order your own copy here.