Catching Up with John Michael Talbot

Pioneering Catholic musician John Michael Talbot visited Colorado last week, which was great for the many hundreds who heard him sing and teach, as well as for me! 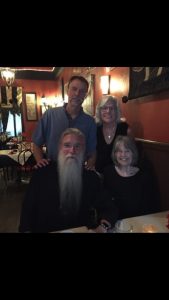 I was able to catch up with John Michael to do an article for the Colorado Springs Gazette. Plus Lois and I were able to join John Michael and Viola for dinner.

The “Musical Legends” article brings together John Michael and another musical legend–Bill Gaither–who is still going strong at 80 years old.

Though different in many ways, Talbot and Gaither have established themselves as musical legends, but not only by their sales figures. They’ve impacted live audiences for decades, and many people sing their songs from hymnals on Sundays. Both artists have also mentored other artists.

John Michael sang at an event organized by the local St. Thomas Aquinas society, including both classics and new songs from his upcoming album, The Inner Room, his 55th release, which comes out in September.

The album is based on Jesus’ Sermon on the mount and features top musical collaborators: 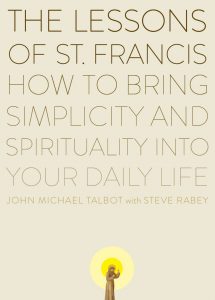 The Lessons of St. Francis, the first book John Michael and I wrote together, is now in its 31st printing. The new version features a new cover.

The cover emphasizes St. Francis’s “smallness” and humility–characteristics that one can also see in Pope Francis, who adopted Francis’s name upon being elected pope.

You can order the book here.

Two years ago, Viola had an idea. “Start a bakery!” Today, the Little Portion Bakery is generating funds for the Brothers and Sisters of Charity, the community John Michael founded.

I particularly like Viola’s Granola and St. Anthony’s Hermit Bars, named after the founder of Western monasticism, and made with blackstrap molasses, raisins and pecans. “Ten out of ten hermits agree!” says the online catalog

John Michael’s appearances in Colorado, New Mexico and Texas are part of his itinerant ministry.

“Like St. Francis, we are going from parish to parish in a time of great need in our culture,” he says, “rebuilding the church one parish at a time, and renewing hearts one life at a time.”