Just In time for Francis’s feast day this week, my story in The Gazette about local believers who try to incorporate aspects of the saint’s teaching into their lives.

And here’s a bonus: a portion of the story that was cut from The Gazette because of space limitations (which means the story I turned in was too long!):

“Peace, People and Planet”
Steve Saint was in high school when he encountered St. Francis in a movie theater. He had come to see “Jesus Christ Superstar,” but the second feature, “Brother Son, Sister Moon,” introduced him to Francis and led to his converting to Catholicism and devoting his life to following Francis’s model.

“I was raised Lutheran, and became an evangelical in high school,” said Saint. “And even though Protestants often consigned Catholics to hell, I could see clearly that Francis was a way more committed Christian than I was. He was a compelling figure who gave his entire life to Christ.” 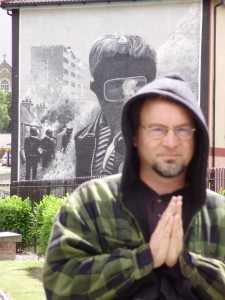 For the last five years, Saint has served as Director of the Pikes Peak Justice & Peace Commission. The local organization serves “peace, people, and planet.”

“Francis taught that God speaks through all of creation,” he says. “People can either see creation as sacred, or we can trash everything God created, subjugating it, having dominion over it, chewing it up and throwing it away.”

Saint can clearly see the influence of St. Francis on pope Francis. “He has done things that would make St. Francis smile, like shunning the papal mansion and the Vatican’s trappings, by washing the feet of people in a drug rehabilitation center, and by the inviting way he cares about people.”