I’m back after an extended absence with some exciting news that actually helps explain that absence.

Super Bowl fever is spreading here in Colorado, but even if you don’t like the Broncos or Seahawks, you will love the new book I wrote with NFL All-Pro center Matt Birk and business/leadership guru Rich Chapman: All-Pro Wisdom: The 7 Choices That Lead to Greatness. 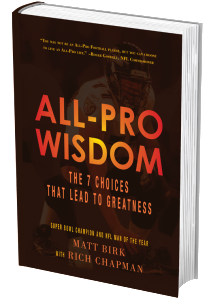 Matt is scheduled to discuss the book on “Hannity” on Fox News this Thursday night Jan. 30.

In his 15 seasons in the NFL, Matt was a two-time All-Pro NFL center and was the NFL’s 2011 Walter Payton Man of the Year. (He was also a member of the Baltimore Ravens team that beat the Broncos in the 2013 AFC Championship game, but even that can be  forgiven.)

All-Pro Wisdom explores issues of character and commitment that lead to greatness in all areas of life, and features insights from other all-pro players, including the NFL’s 2012 Walter Payton Man of the Year Jason Witten, Jerod Allen, Anquan Boldin, Adrian Peterson, Troy Polamalu and Aaron Rodgers.

NFL Commissioner Roger Goodell wrote the foreword to the book, saying, “This is not a book about football. It is a book about choices.”