After a journey of five years and 1.8 billion miles, NASA’s solar-powered Juno spacecraft is getting ready to finally unravel some of the turbulent  planet’s many mysteries.

NASA’s Juno spacecraft will orbit, study and photograph Jupiter for the next 20 months.

How was this huge planet (and our solar system) created?

And what can we learn about the horrendous hurricane that’s causing the planet’s fabled Red Spot? (The spot, about two times the size of Earth, has whirled out of control for centuries and will do so for centuries more.)

New York Times science writer Kenneth Chang explained the mission’s goals for the next 20 months in his article, “NASA’s Juno Spacecraft Will Soon Be in Jupiter’s Grip.”

Astronomers divide the solar system’s planets into two groups. The four terrestrial planets closest to the Sun are small, rocky, and solid. The four more distant Jovian planets are large, gaseous, and surrounded by numerous rings and moons.

Jupiter is 11 times the diameter of Earth. It has 121 times the surface area and 317 times the mass of our planet. More than fourteen hundred Earths could squeeze into Jupiter. 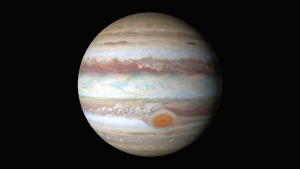 The planet is a turbulent, gaseous giant with no solid surface but plenty of activity. Juno will use scientific devices to see through Jupiter’s clouds and even analyze its core.

The slight fluctuations in Jupiter’s gravitational pull, measured by shifts in the frequency of Juno’s radio signals, will tell the density of the planet’s interior and whether there is a rocky core within, where pressures might reach half a billion pounds per square inch.

Some of Juno’s tasks will be determined by amateur astronomers. NASA has invited people to join its “JunoCam community” and help determine what photos the spacecraft will take.

When its work is done, Juno will self-destruct, making sure that no human microbes pollute the environment of Europa, a moon of Jupiter that may have deepwater oceans beneath its thick ice crust. Astronomers suspect there may be life in these oceans, and NASA doesn’t want us to mess it up.

Four centuries ago Galileo discovered Jupiter’s four moons. Now, we’re getting ready to see what Juno can find out. You can follow Juno’s real-time progress here.

Read all about Jupiter, our solar system, and missions to understand the heavens in Star Struck: Seeing the Creator in the Wonders of Our Cosmos, written by yours truly and astronomer David Bradstreet (Zondervan, Sept. 2016).