Home › Articles › Church’s Lunar Communion Is Out of This World!

Church’s Lunar Communion Is Out of This World!

Church calendars are seldom exciting, but Webster Presbyterian Church near Houston hosts an annual event that is out of this world. Lunar Communion Sunday–to be celebrated this Sunday, July 17–honors the congregation’s legacy as the “Church of the Astronauts.”

Apollo astronaut Buzz Aldrin, a church elder, celebrated communion on the lunar surface on July 20, 1969–the day before he and Neil Armstrong became the first humans to walk on the moon. Sitting in the lunar capsule, Aldrin poured a few drops of wine into a small silver chalice, watching the weightless red liquid gracefully curl in the vessel. As he swallowed the wine and chewed a small piece of bread, he read John 15:5, which affirmed his dependence on God: 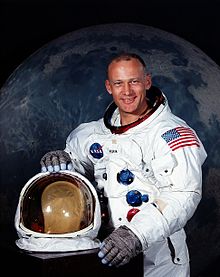 “I am the vine; you are the branches. If you remain in me and I in you, you will bear much fruit; apart from me you can do nothing.”

You can read all about Aldrin and other Christians in the space program in “Bless Thou the Astronauts,” published by Christianity Today’s “The Behemoth” online magazine. The article is an excerpt from Star Struck, my new book with astronomer David Bradstreet.

Back in December 1968, Frank Borman, James Lovell, and William Anders became the first humans to orbit the Moon. The Apollo 8 astronauts celebrated by delivering a simple Christmas Eve message for everyone back home, taking turns reading the first ten verses of Genesis 1 from the King James Bible. After hearing taxpayer-supported astronauts reciting the Bible from space, O’Hair claimed they had violated the First Amendment. The case was dismissed, but from now on, Christian astronauts would find quieter ways to express their faith.

Buzz Aldrin’s lunar communion was kept quiet, but he has often spoken and written about it over the years. “It was interesting to think that the very first liquid ever poured on the moon, and the first food eaten there, were communion elements,” he said.

A Church that Loves Astronomers, Astronomy

Lunar Communion Sunday is just one of the ways Webster Presbyterian Church’s seeks to honor God and serve members of the scientific community. Its sanctuary is beautifully decorated with astronomical improvisations on the standard church furnishings. Stained glass windows portray nebulae, the gigantic clouds of stellar dust and gas that the Hubble Space Telescope is examining. The cross features slices of a Mexican meteorite that NASA astronauts used while training to handle moon rocks. 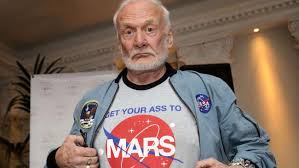 Nearly half a century later, Aldrin remains star struck, and he has emerged as a major supporter of exploring Mars. As he wrote in a 2013 New York Times column, “The Call of Mars”:

Fast forward to today. Now I see the Moon in a far different light — not as a destination but more a point of departure, one that places humankind on a trajectory to homestead Mars and become a two-planet species.

It is time to lay the groundwork for effective global human exploration of space.

Read all about Buzz Aldrin, the space race, and the quest to reach Mars in Star Struck: Seeing the Creator in the Wonders of Our Cosmos, written by yours truly and astronomer David Bradstreet (Zondervan, Sept. 2016).