You can see the video report here.

And you can see still photos here.

In 2008, I interviewed reporter/photographer about her book, Burning Book, and about the spiritual aspects of the annual Burning Man celebration:

Jessica Bruder is a reporter for the Portland Oregonian and the author of the 2007 collection, Burning Book: A Visual History of Burning Man.

“Spiritual isn’t a word I use a lot in my own life,” says Bruder, who was raised in a Jewish-Catholic family. “I spend most of my time in the secular world. But as I look at it, and think about the roots of what drives people to participate in Burning Man, I see that it’s a sense of community similar to what people find in religion.

“If they’re religious people, or if they hunger for something bigger than them, Burning Man is certainly bigger than they are, even though they create it themselves.”

No, we’re not talking about the popular song recorded in 1962:

Well, I don’t care if it rains or freezes,
Long as I have my plastic Jesus
Riding on the dashboard of my car
Through all trials and tribulations,
We will travel every nation,
With my plastic Jesus I’ll go far.

We’re talking about a modern-day anti- consumerist prankster who goes by the name Plastic Jesus.

His latest attack involved sneaking a Useless Plastic Box into a Best Buy store and posting this photo. 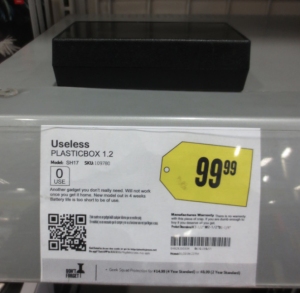 We will be looking to see what Plastic Jesus does in the lead up to Christmas! 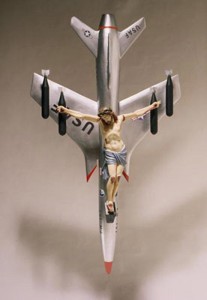 Leon Ferrari, a controversial Latin American conceptual artist and activist, died July 25, 2013. His most famous work, which features Christ crucified on an American fighter plane, expressed his opposition to the Vietnam War, and more.

Like his other works, La civilización occidental y cristiana explored themes of religion, power and illegitimate authority, especially the oversized global influence of both the United States and the Roman Catholic Church. When the work was exhibited in Ferrari’s native Argentina in 1965, the Catholic Church had the exhibit closed down. He faced a similar fate in 2004, when the Archbishop of Buenos Aires helped close down a show featuring more Christian imagery. (That Archbishop is today’s Pope Francis.)