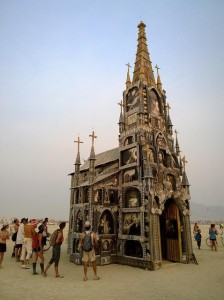 You can see the video report here.

And you can see still photos here.

In 2008, I interviewed reporter/photographer about her book, Burning Book, and about the spiritual aspects of the annual Burning Man celebration:

Jessica Bruder is a reporter for the Portland Oregonian and the author of the 2007 collection, Burning Book: A Visual History of Burning Man.

“Spiritual isn’t a word I use a lot in my own life,” says Bruder, who was raised in a Jewish-Catholic family. “I spend most of my time in the secular world. But as I look at it, and think about the roots of what drives people to participate in Burning Man, I see that it’s a sense of community similar to what people find in religion.

“If they’re religious people, or if they hunger for something bigger than them, Burning Man is certainly bigger than they are, even though they create it themselves.”