A Curious Quest for Character and a Tale of Two Sinners

Once upon a time, evangelicals rallying around family values declared that character was a prerequisite to leadership–especially in the president’s office.

As journalist Jonathan Merritt puts it:

“Character counts.” That was evangelicals’ rallying cry in their all-out assault against Bill Clinton beginning in 1993. In response to what they perceived as widespread moral decline, some religious groups had become aligned with the Republican Party during the Ronald Reagan and George H.W. Bush administrations. To them, the allegedly draft-dodging, pot-smoking, honesty-challenged womanizer symbolized everything that was wrong with America.

But things have changed, as Merrit shows in his Atlantic article, “Trump-Loving Christians Owe Bill Clinton an Apology.”

Merritt’s subhead says it all: “Conservative evangelicals were unwilling to offer forgiveness to a Democrat who asked for it. But they have freely offered it to a Republican who doesn’t want it.” 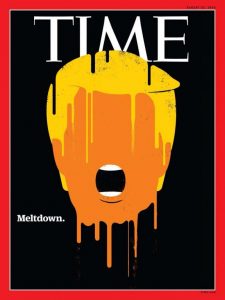 More than two decades after Clinton’s first inauguration, many evangelical leaders of that era have endorsed the draft-dodging, foul-mouthed, honesty-challenged womanizer named Donald Trump for president. Only a handful refuse to follow suit, including Albert Mohler, the president of The Southern Baptist Theological Seminary. During the Clinton years, he regularly argued in mainstream media outlets that the Arkansan was morally unfit to serve as Commander-in-Chief.

“If I were to support, much less endorse, Donald Trump for president,” Mohler says, “I would actually have to go back and apologize to former President Bill Clinton.”

Back in Sept. 1998, James Dobson was “shocked,” “dismayed,” and “alarmed” by Bill Clinton’s affair with Monica Lewinsky and “the willingness of my fellow citizens to rationalize the president’s behavior.”

“That disregard for morality is profoundly disturbing to me,” wrote Dobson in his monthly letter to supporters of Focus on the Family, the ministry he later left to found Family Talk. “The public has never approved such misconduct.”

Dobson has endorsed Donald Trump, who has his own issues with marriages, extramarital affairs, racism, and sexism. Dobson has not condemned Trump’s sins, claiming he is a “baby Christian” who apparently doesn’t know any better.

The Apostle Paul said “all have sinned and fall short of the glory of God,” but Trump gets more grace from Dobson than Clinton ever did:

“Why aren’t parents more concerned about what their children are hearing about the president’s behavior? What have we taught our boys about respecting women? What have our little girls learned about men?”

It’s all about character, Dobson wrote.

As it turns out, character DOES matter. You can’t run a family, let alone a country, without it. How foolish to believe that a person who lacks honesty and moral integrity is qualified to lead a nation and the world!

Dobson concluded that Americans would soon face the consequences if they continue to tolerate blatant immorality from their national leader:

We are facing a profound moral crisis not only because one man has disgraced us but because our people no longer recognize the nature of evil. And when a nation reaches that stage of depravity – judgment is a certainty.

Grudem, a professor at Phoenix Seminary, wrote in 2007 that evangelicals “will lose any moral high ground” if they support Giuliani, “a pro-abortion, pro-gay rights candidate who is on his third marriage and had a messy affair prior to his divorce from his second wife.”