The world lost one of its greatest and most popular poets Saturday Aug. 31 when Seamus Heaney died in a Dublin hospital. 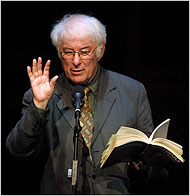 Born on a family farm named Mossbawn in County Derry Northern Ireland, Heaney often wrote about potatoes, peat and the power of rural tradition, as well as the Troubles that plagued his native land. Awarded the Nobel Prize in Literature in 1995, his life and work were described in the Award Ceremony Speech:

Seamus Heaney comes from a humble, farming community, but at the same time we meet in him a learned poet who in the very microcosm of language cultivates and reveals the Celtic, pre-Christian and Catholic literary heritage.

His first collection of poems, published in 1966, included “Digging,” which paid homage to his rural roots:

By God, the old man could handle a spade.
Just like his old man.

Before describing his choice of a different calling:

Between my finger and my thumb
The squat pen rests.
I’ll dig with it.

Ten more collections would follow, the last published in 2010.

His 1984 collection, Station Island, was inspired by Lough Derg, the penitential pilgrimage site that has attracted disciples for centuries:

Blurred swimmings as I faced the sun, my back
to the stone pillar and the iron cross,
ready to say the dream words I renounce…