They say one thing that doesn’t change is change itself, but pioneering futurist Alvin Toffler, who died this week, said the pace of change is picking up velocity, causing a disruptive condition he called “future shock.” Here’s how he described the symptoms: 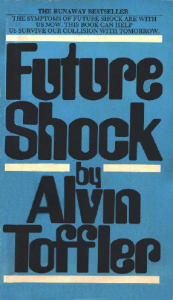 “…the shattering stress and disorientation that we induce in individuals by subjecting them to too much change in too short a time.”

The world’s most famous futurist published Future Shock in 1970. “This is a book about what happens to people when they are overwhelmed by change,” he wrote.

“Change,” Toffler wrote, “is the process by which the future invades our lives.” And he warned that many people would struggle to adapt to the increasing pace of change. “Unless man quickly learns to control the rate of change in his personal affairs as well as in society at large, we are doomed to a massive adaptational break down.”

Toffler issued predictions, correctly foreseeing the demise of the nuclear family. But he missed the boat on cities, incorrectly suggesting that they would shrink as work was distributed. 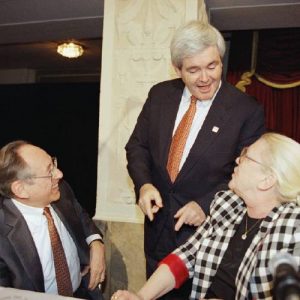 The BBC’s article, “Alvin Toffler: What he got right – and wrong,” does a good job of assessing his hits and misses. But his central point about the disruptiveness of rapid change remains prophetic. He gave a memorable name to a new malady that is “a real sickness from which increasingly large numbers already suffer.”

Change Continues to Disrupt
I believe Future Shock is one of the sources of the chaos in this presidential election cycle. Voters reacting to globalization and rapid social change are recoiling, demanding that leaders do something to reverse the “new normal.”

But yesterday’s version of normal is unlikely to return, says futurist Thomas Frey of Colorado’s DaVinci Institute. I interviewed Frey for the article, “Future Shock, Revisited,” for The Gazette.

Frey is more optimistic than Toffler. “Some things we are adapting to quite quickly,” he said, “but there are some things we still have a hard time getting our minds around.”

“Look at the adoption speed of new business models. After the invention of radio, it took 38 years for the technology to reach five million users. TV took only 13 years to reach that number. The Internet reached that level in four years, while Twitter took only nine months, and the Angry Birds game reached five million in 35 days.

“We’re at point the point where a new start up business can come out of woodwork and reach 50 million users in less than week. Everything moving exponentially.”

The present becomes the future every second. Toffler and other futurists show that this process can be destabilizing when we feel it’s moving too quickly to destabilize the cultural traditions we embrace.

What can we do to better adapt to the pace of change?