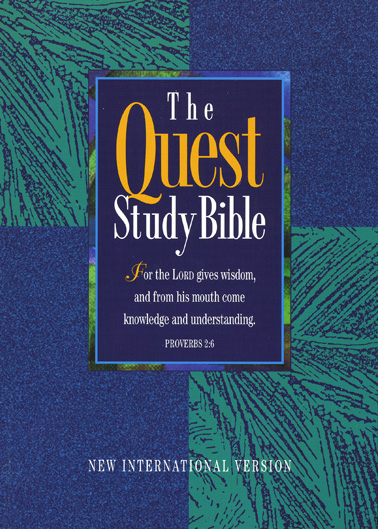 This popular study Bible was created by the editors of Leadership journal and Christianity Today for readers and students who ask the tough questions such as: What’s this mean? Why did this happen? And what difference does it all make?

More than 1,000 readers were surveyed about the questions and problems they encounter when reading the Bible. These readers produced thousands of questions. Then the editors assigned leading Bible scholars to work with writers to address these provocative issues in ways that readers could understand. Steve worked with Dr. Robert Alden, professor of Old Testament at Denver Seminary.

Terry Mattingly, Scripps Howard News Service: “(The Quest Study Bible) is a rarity in an age when legions of publishers produce thousands of versions of the Bible, year after year. Most modern study Bibles focus on increasingly narrow niches of readers, from MTV viewers to grandparents, from alcoholics to workaholics. The Quest Bible’s question-and-answer reference materials have dared to plow common ground.”